Evaluation of the Utopia Congress

Conclusion: The pompous claim of an Anti-Capitalistic-World Cup – as the Utopia Congress was announced – has failed miserably. But as a rehearsal, to try out whether we can convey political content with other forms, it was a success.

Participation was disappointingly low with 13 participants in the network and 6 in the room. That had several reasons.

– Originally, the Congress was scheduled for 7 days, then shortened to 5 and then on short notice to 1 day. Some people had planned to come on other days than Monday.

– The organization team was initially overwhelmed with only 2 people (one of whom passed away).

– When relatively late (mid-May) 6 teams were established, the teams were supposed to be involved in the public relations, which was initially not clearly conveyed.

– Then 1 week before the start, 3 teams  withdrew their participation for reasons for content reasons and 1 team for personal reasons and the chaos was perfect. We do not want to go into detail, because it will not support the discussion in the direction of a better world for all world citizens but rather brings it to a hold. If you do not believe us and want to form your own opinion, please contact the departing groups themselves: artlantica@freenet.de; berliner.commune@lists.riseup.net; michael_ickes@hotmail.com

The shortage of personnel lead to not enough tech support, which meant that there was no sound in the live stream at first, the scoreboard from the “stadium” was not visible, the immobile camera did not show exciting angles or views and the music program during the breaks with a DJ would have been better.

The Münzbergsaal was great because it was “decorated” in the form of a football stadium.

From participants via live-stream and in the hall we got an absolutely positive feedback regarding the form.

– It was an entertaining way to get political content across.

– It was great that you could throw in your own questions, the voting, greetings and wishes for music.

– For the two participating teams “Utopia is feasible” and “5-hour week” it was an enriching experience that they would like to repeat at any time: it was a) fun and b) it was a real challenge to spontaneously respond to the questions of the audience and to implement them theatrically on the field (see photo) and c) to get a direct feedback from the “fans” through the vote.

– Although it was a fight with losers and winners (decision came only by penalty shoot-out !!!), it has led to the opposite: a friendly cooperation with networking and long-term cooperation.

Whoever wants to use this form – let’s call it soccer theater – for political events, we recommend the following essentials: hall / stage as a soccer field with designated goals, 11 (content) positions, referee with whistle and flag, reporter that explains the rules and fouls and the process, as well as interviews, teams with jersey, pennant, hymn, votes (audience determines whether goal has been scored or a penalty scored), questions from the audience that the referee throws into the “game”, and bets on the game outcome where prizes are to be won.

Darwin Dante for the team www.5-Stunden-Woche.de 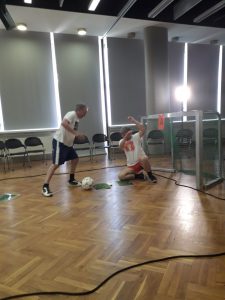